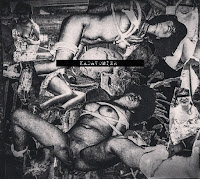 Vomir has spent over a decade creating works of immersion, a celebration of stasis with which to shut out the world and be consumed by sound. Into that ideal Romain Perrot has this time allowed Kadaver’s Michael Zolotov some space to merge his flayed noise electronics, the two realising ‘Kadavomier’ as a single extended track on Australia’s Inner City Uprising label - or split across two sides of a cassette pressing on The Hills Are Dead Records for those needing a breather and a walk across the room inside their 68 minutes of listening. In addition to realising the collaboration in its unedited form the CDR adds seedy collage art from Cursed Earth Cassettes’ Ben Schmidt which I prefer to the cassette’s somewhat hastily realised cover, making the disc the preferred version (other than for analogue format snobs, of course).

After an opening grab of movie dialogue – the importance of which is lost on me – as expected Vomir sets up a dominating central deluge, a resolute current with a hefty mid-range span and peaking surface which runs the entire length of the hour-long piece. Kadaver then forms and moves shapes under the surface and slotted into Vomir’s strong current, strewing bubbles of flange, low-end shadow, and smaller distortion deviations through the choppy Vomir singularity, eventually building to add a rotary blade insistence, contact microphone creasing and unrestrained effect pedal squall in its closing maelstrom.

As its strongest the piece almost vibrates as Kadaver’s intrusions filtrate through Vomir’s central contribution, the final quarter of the piece swelling in size as violently created noise electronics are layered as much as possible over the mainstay timbre (still never fully obscuring it), but earlier subtler infusions cloud or even obscure Romain’s smouldering texture in a more cautionary way, as if probing for weaknesses before ultimately deciding that only an all-out assault is capable of taking down the Frenchman’s construct. Those earlier forays are difficult to catch but cleverly shape the bulk of the lengthy disc, giving ‘Kadavomier’ hints of life and movement even as one of its architects wants to smother all of that with a black garbage bag.

From afar ‘Kadavomier’ seems immobile but the collaborative injection scatters plenty of finely adjusted detail through the piece, creating a track which on close listen is far more turbulent. I struggle to fully appreciate truly minimalist and unchanging harsh noise wall creations, but ‘Kadavomier’ only takes what it needs from that subgenre, testing its capacities with finer perforations before pressing a major morass through; and giving unsettled home listeners like me points within the piece to locate, extract, and chase in development – all without compromising the focus of Vomir’s missive.

https://innercityuprising.bandcamp.com/album/kadaver-vomir
Posted by Unknown at 10:07

Please contact me if you have any review content for submission. I will not review your work just because it is sent; content outside the (what I consider obvious) parameters of 'Night Science' will be discarded. I don't review links or digital releases.